Sir Chris would rather be ‘SOC, or Same Old Chris’ 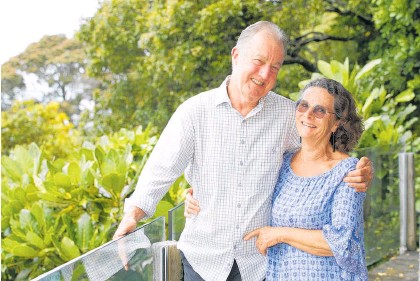 He might be Northland’s newest knight, but Chris Farrelly has strong ties to Te Puke. Farrelly was born in Te Puke, at the maternity annex, delivered by the well-known Dr Leonard Randell and Matron Flan Lenihan, and was the first of the eight children of Pat and June Farrelly (nee Porter) who were, at the time, farming in Maketu¯ Rd. Farrelly says he struggled with the title associated with his New Year Honour — a Knight Companion of the New Zealand Order of Merit (KNZM) in the Queen’s New Year Honours list for services to health and the community, and with it comes the title of “Sir”. He said the title “Sir Chris” feels strange and that he’d prefer “SOC, or Same Old Chris”. And while the honour and accolades are not why Farrelly got into helping — that was to “give a voice to the voiceless in society” — he appreciates his work has been deemed worthy of such a high credit. Farrelly started his service in Northland in 1991, when he took up the role of HIV/AIDS co-ordinator for the then Northland Health. This was his way of giving that voice to the voiceless as HIV/AIDS caused fear and panic as it spread around the world. It was initially, and wrongly, seen as a disease of homosexuals, but Farrelly helped break down the stigma and raised widespread awareness of the issue. He said this first introduced him to some heavyweight Maori leaders, who helped guide his journey as he worked to break down the myths and barriers surrounding people with HIV/AIDS. “I went up to a tangi [of an Aids sufferer] in the Hokianga and they wouldn’t have an open coffin as they felt if it was open it would infect everybody. “There was so much misinformation around it then. “But we went to Dargaville and got them to have an Aids Awareness Week — the first of its kind in New Zealand in a little town in Northland. Things like that helped overcome the bigotry and just incorrect information that was around at the time,” he said. He later ran Dargaville Hospital — saving it from planned closure — before starting and leading Manaia Health, the region’s first Primary Health Organisation (PHO) from 2003 to 2016. Farrelly said this involved getting GPS, iwi and communities to work together for the best primary care outcomes. “We did this thanks to the amazing people I worked with to get some amazing outcomes. I said when we started that it really had to be a 50-50 partnership with Maori. “I realised if we wanted to make a positive difference to health outcomes we had to be at the top of the cliff.” As part of the PHO he helped implement a Healthy Homes initiative that saw more than 12,000 of substandard Northland homes retrofitted and insulated to make them warmer and healthier. “Now that was a real gamechanger. Another was reintroducing milk in schools after we approached Fonterra. We found kids weren’t drinking milk here, instead drinking rubbish fizzy stuff, so we wanted to get them back to drinking milk.” From there he was head-hunted to become the Auckland City Missioner, running the Auckland City Mission, which cares for the the city’s poor, needy and homeless. Farrelly said prominent among the many highlights of his career was overseeing the building of the new Auckland City Mission — “Homeground”— in Hobson St that includes 50 apartments to house homeless people, along with support services to wrap around them. He retired from the City Mission last year to return to his beloved Northland, to live at Whangarei Heads with his wife, Sue Rishworth. Farrelly’s family moved around a lot when he was growing up but the family had a bach at Woolleys Bay on the Tutukaka Coast where they regularly stayed so he has always considered Northland home. He’s delighted to be back in the region. Farrelly said his honour is not just for him, but the many wonderful and amazing people he had worked with over the years: doctors, nurses, GPS, Maori leaders, such as Erima Henare and Puna Matenga, and ordinary folk. But the biggest recognition had to go to his wife. “Sue has always been there for me and is such an amazing and inspiring person that I couldn’t have done anything without her . . . she has helped sow the seeds for what I do and supported me throughout.”