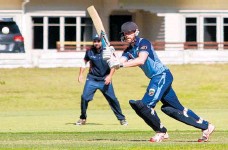 CRICKET The second half of the Baywide cricket season sees teams compete for the Versatile Tauranga Williams Cup. Last season’s runners-up, the Otumoetai Cadets, faced Te Puke’s premier side first up at home. After winning the toss and deciding to bat first, Cadets got off to a steady start with Spencer Wills anchoring the innings with 61 runs off 91 balls. He partnered one of the Cadets’ most decorated players, Jono Boult, who was playing his first game of the season and together put on an 80-run partnership before Wills succumbed to the bowling of Mikaere Leef in the 38th over. Boult continued on until he was run out for 70 off 59. Chasing a total of 256, Te Puke relied on the experience of opening batsman Tai Bridgman-raison. He did not disappoint with a skilful 61 before the finger went up and he was out lbw in the 33rd over. Contributions from captain Blair Mckenzie (30), Josh Earle (33*) and Hamish Wilde (34) weren’t enough to get their side over the line, falling short by 42 runs. Over in Rotorua at Smallbone Park, Centralindians were sent into bat by Pa¯pa¯moa. It was a shaky start with the ball for the Pa¯pa¯moa bowlers with four wides in the first over, but they soon got into their groove, dismissing opener Daniel Ford for eight in the 11th over. Fellow opener Lovely Sandhu got Central off to a good start, including a 17-run over, but was dismissed shortly after Ford for 39. Cody Fell contributed a valuable 43 and a quick-fire 72 off 36 from captain Julian Danby set the total at a formidable 257. Pa¯pa¯moa’s middle order came to the party with Xavier Lea producing a run-a-ball 45 and Paul Inglis a steady 36, but they ran out of wickets in the 47th over with 55 runs still to chase down. On Saturday, Te Puke area at home to Greerton while Pa¯pa¯moa have the bye. Element IMF Otumoetai Cadets 256/9, 50 overs (Jono Boult 70, Spencer Wills 61; Mikaere Leef 3/46, Hamish Wilde 2/15). The Flying Mullet Te Puke 214/7, 50 overs (Tai Bridgman-raison 61, Hamish Wilde 34; Isaac White 2/36). Element IMF Otumoetai Cadets won by 42 runs Bayleys Central-indians 257/7, 50 overs (Julian Danby 72, Cody Fell 43; Harrison Leach 3/34). Pa¯pa¯moa 202/10, 46.4 overs (Xavier Lea 45, Paul Inglis 36; Sam Lund 2/37, Lovely Sandhu 2/24). Bayleys Central-indians won by 55 runs