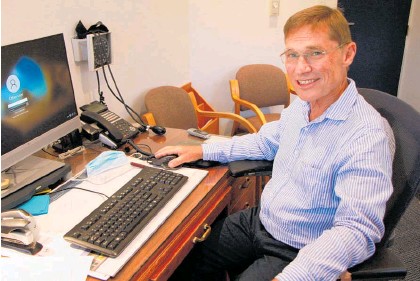 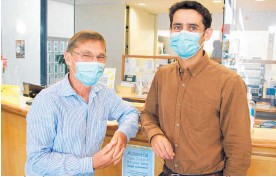 Dr Roger Ward began working at Te Puke Medical Centre in 1978 and retired at the end of last year. He describes medicine in the mid1980s as ranging from boring to frightening, to dangerous — all in a day. But that was literally and metaphorically a good distance from general practice in New Zealand. Roger and his family — wife Jan and children Marc and Melanie — spent two and a half years in the military town of Tabuk in Saudi Arabia between 1984 and 1987. “Saudi Arabia was great for family life and it was great for broadening my knowledge of medicine, especially tropical medicine,” he says. “And I, like a lot of Kiwis that were there, tended to get the No 8 wire clinics — the ones where you had to think on your feet.” He ended up looking after about 2400 patients — from Bangladeshi cleaners to neurosurgeon wives and families. “I wouldn’t do that forever, but it taught me a lot.” It was very different to the practice he had left behind in Te Puke, a job he secured through word of mouth and an interview at what was then a four-doctor rural practice. “I had previously spent 15 months in Thames as a house surgeon and senior house surgeon and that was front-end medicine at the time. I had practices offered to me in Thames, but I wandered down to Te Puke and they said ‘when can you start?’ That’s how it happened.” As a junior partner he was rostered on call every Friday night. “So when I worked weekends I worked Friday, Saturday, Sunday, 72 hours on the trot. And when it was the long weekend I worked the Monday as well and you were supposed to turn up bright-eyed and bushy-tailed [afterwards].” In the late 1970s and early 1980s, there were no nurses backing up the on-call doctors. “So your wife and, in my case, your two primary school kids, sometimes I’d have to get them in to handle the phones while I was looking after people. “I’ll never forget one Saturday afternoon, I was looking after a person with severe chest pain in one room, Jan was handling the phone and my daughter of 7 at the time was taking pieces of glass out of a drunk guy’s foot while he lay recumbent.” At the practice there was no appointment system — ”you turned up and were seen eventually” — and doctors could get called away to a road accident or to Te Puke Maternity Hospital to deliver a baby. Roger says it wasn’t a style of medicine that was good for family life: “Many a family outing was ruined by a phone call: ‘Mrs X has just gone into labour’. Bang goes the rest of the day.” In 1987 it was time to make a decision — stay in Saudi Arabia or come back to Te Puke. “I could have stayed on there, but you are forever an expat and your kids would have ended up going to boarding schools in England and we didn’t really want that. So it was a conscious decision, very much, to come back here and my partners were people I was compatible with.” He liked the mix of rural and urban, and he and Jan now live on a block where they keep alpacas. “You slowly get absorbed into a town — it’s part of you.” He estimates to have carried out between 200,000 and 250,000 consultations. “You do get bonded to the patients. I did a little exercise about a month ago. I looked at my [patient] list [for the day] and I wrote down what I thought they were going to be coming for — and I was 80 per cent wrong — that’s what general practice is about — it keeps you humble. “You are only as good as your last stuff-up, but the other thing is, patients forgive you.” Patients and intellectual stimulation are the main things Roger says he will miss. When the maternity hospital closed in 1988, Roger studied for and passed a postgraduate Diploma in Aviation Medicine and since then has been an aviation medical examiner. “I think it’s important in general practice not just to sit here. That stretched my brain because aviation medicine is different to ordinary medicine — it’s more like diving medicine. I had to relearn a lot of basic stuff and it teaches you about hearing and teaches you about dizziness, pulling Gs, insomnia and it teaches you about sleeping pills and a lot of little lateral things that you don’t think about. “Everything in medicine is changing and your mind functions best when it is like a parachute — it always stays open — that’s very important for general practice.” It’s a part of Roger’s life that will change with retirement. “I’ll miss the brain thing, and I’ll miss people I’ve known for many years — but it’s time.” He believes living in Saudi Arabia gave Marc and Melanie the travel bug and they both live overseas. “I’m not a big ‘this is the future’ because the future bites you — look at Covid — but I do want to be able to go and see our kids,” he says of retirement plans. “I might actually use my library card and take my own advice and take some exercise. And the alpacas — I might be able to look after them a bit better.”