Dairy payout brings $1b to Bay

About $13 billion is expected to be injected into the national economy off the back of Fonterra’s latest “near-record” payout — including $1b into the Bay of Plenty. Farmers say they would be spending money on environmental work and paying down debt, but increasing fertiliser and petrol costs were a concern. Fonterra has increased and narrowed its farmgate milk price range to $7.90-$8.90/kg from $7.25-$8.75. This means the new mid-point forecast lifts from $8/kg to $8.40. Fonterra chief executive Miles Hurrell said the company had seen demand from China ease over the past couple of months but other regions had kept demand firm. On the supply side, overall global milk supply growth was forecast to track below-average levels, driven by a slowdown in United States production due to the increased cost of feed. Fonterra Central North Island operations general manager Tony Maclean said the forecast was at a “near-record” and farmers were happy. “At $8.40 that is going to inject $13 billion into the economy . . . this is just brilliant. I think there is a real demand for New Zealand dairy relative to supply, it’s still desirable globally.” Maclean said it was the third season that had been affected by Covid-19 and farmers were aware it was the biggest risk to their business. “They’re appreciative of the challenges . . . we’re facing as a manufacturing organisation,” he said. Operational precautions on sites and on farms had been put in place to control and manage risk. At the manufacturing plants, this includes working in bubbles, full PPE gear, distancing, temperature checking and frequent sanitation. Federated Farmers Bay of Plenty provincial president Darryl Jensen said the payout was positive news, which would mean farmers had more money to spend. “It will make it a lot easier for farmers to do some of the environmental work that needs to be done. That might include upgrading their effluent systems and doing riparian work.” Paying down debt may be another focus. “Farmers realise when there are some upsides there are downsides, so some will be putting a bit away for a rainy day to have a bit of fat in the system.” Federated Farmers Rotorua/ Taupo¯ provincial president Colin Guyton agreed the payout was pleasing — however, costs were escalating at a fast rate. “Fertiliser has probably increased by 15 per cent in the last month and there is concern around fuel prices. Usually, all those costs get passed on to farmers. “Those costs are okay when the payout is good but when the payout drops those costs don’t come back and then it is really hard for farmers.” Other concerns included compliance regulations and staff, but Guyton said farmers were in a good space at the moment. Dairynz farm performance general manager Sharon Morrell said farmers had been buoyed by a positive run with a milk price that would enable reinvestment in repairs and maintenance, debt repayment and environmental development. But staff shortages were one of the main issues facing farmers in the Bay of Plenty and across New Zealand. “Some farmers have responded to that by using flexible milking arrangements like three milkings in two days, rather than the usual four.” She said dairy does offer some of the best wages in the agri-sector. Entry positions started from $48,000 a year, while farm managers can earn more than $100,000 a year. “We know most workers on dairy farms would recommend it to their friends, which is a fantastic story to tell,” Morrell said. “As a sector, we are also continuing to build great workplaces. Dairynz’s Good Boss campaign supports farm owners and managers to be good bosses and initiatives such as Workplace 360 helps farmers identify strengths and weaknesses in their workplace, in order to make improvements.” Figures show there are about 1300 dairy workers on farms and 1700 working in the dairy sector, in the Bay. Nationally, there are about 40,000 people working on dairy farms and 50,000 working in the dairy sector in total. 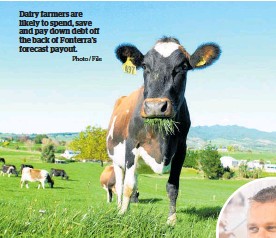