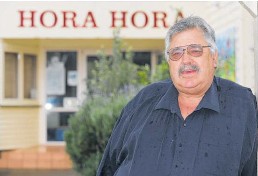 Life would have been a lot easier if he hadn’t done what he has, but it would not have been half the fun, says Pat Newman. Tai Tokerau Principals’ Association president since 2007, Pat is “chuffed” to be made a Member of the New Zealand Order of Merit for his services to education. “I am chuffed; for myself, for my kids, wife and my staff, because they kept everything going when I was busy with work things. It is also recognition that we are quite creative at Hora Hora. “My dad would have been very proud of it too. We were brought up in different eras but when he left, he left the world in a better place, and that has been the driving force for me too.” Pat has been involved with primary education for 45 years, 39 of these as a principal. He is currently the principal of Hora Hora Primary School in Whanga¯rei. The 69-year-old said he did not have a clue who nominated him but joked it was because someone wanted him to retire and an honour “would finally get him to retire”. But he wasn’t going to do that any time soon, he said. Pat told the Te Awamutu Courier he had three criteria that would bring about his retirement: “When I consistently didn’t want to get up and go to work anymore; “When I got sick of being mobbed for hugs by 5 and 6-yearolds in the playground; “When the Government takes over schools from the communities.” Pat’s first permanent principal role was at Arohena School in 1982, and while he stayed just three-anda-half years, he says it was an important time in his life. “It was quite a difficult community, but I learnt a lot about forming relationships and making a school work,” he says. Just as importantly, Pat was introduced to his future wife Jules by his aunty, and school committee chairwoman, Rose Smith. The couple married in 1985 before shifting to the bigger, but more remote Tirohanga School (southwest of Atiamuri). They then moved to Central Otago’s Omarama School before spending 10 years at Seddon. The move to Hora Hora School “up North” was to be for five years — it has been over 20. Pat believes moving around New Zealand, changing schools and forming new relationships and friendships was a valuable part of being an educator and leader. He says today’s principals and teaching are unfortunately bound to the paperwork and systems of education, rather than the act of education. “An advantage of the ‘old ways’ was we were able to be human,” he says. “We would live in, and get involved with, the community, help out the locals and get to know the school families.” Pat recalls his time at Arohena and the great camaraderie, both socially and professionally, of all the teachers and principals from the wider Te Awamutu district. “We would gather at Te Awamutu and Kihikihi, sometimes for meetings, sometimes for a drink, and it made us better people and better teachers.” Pat was actively involved in a lot of things in education, from international to national to a local level. He established a trust that provided early childhood education to a small group of high-needs children, plus daily trauma counselling for many children. He had led initiatives to help principals and their staff rethink their curriculum, policies and practices to make a difference for Maori tamariki through kaupapa Maori. He was also involved with the Maori Achievement Collaborative (MAC) from inception in 2014, which was now utilised by hundreds of schools across Aotearoa. He led a growing school, initiating a building programme centred around learning pedagogies. Pat continued to be a board member of the Miriam Centre that provides whanau counselling for Te Tai Tokerau, a member of the New Zealand Teachers Council and previously served eight years before being re-elected in 2019. He has made a significant contribution to the council’s Complaints Assessment Committee, standing strongly against the poor practice and supporting the just treatment of teachers. He was on the New Zealand Principals’ Federation executive for 13 years, serving two years as president.