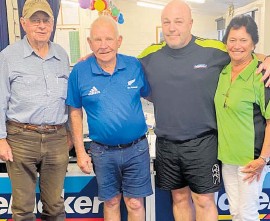 During the last few weeks of action at the Taupo¯ Bowling Club in 2021, the inaugural Placemakers twilight social bowls league proved extremely popular for bowlers and public alike. The on-green action from November 6 to early December, played on Tuesday evenings, took the form of the ever popular televised Bowls3Five. From the outset, 26 teams entered with participants socialising and enjoying their first time trying out the game of lawn bowls. The action promoted a fun game for all. Many of the teams were made up of family, friends and work colleagues and there was huge encouragement from club members in a sports’ venue with a spectacular lake and mountain background. Impressive prizes were distributed to teams each evening with major prizes on finals night. Placemakers’ Chris Bell was on hand to present the wide range of major top prizes on closing night and was thanked by the club for the major input to this successful tournament. For a first-time tournament of its nature, the exercise proved most popular and, because of this success, it will be repeated late in 2022. The O’Brien’s Plumbing and Bathroon team classic at the Taupo¯ Bowling Club at the weekend saw overall success going to the home team of the highly experienced Dave Jones (skip)/Jim Fitzsimons/Rick Whittaker/Jan Hopkins. The team classic featured matches in fours and pairs and proved very popular. Another Taupo¯ team of Vern Hobbs (sk)/Dot Pope/Bill Thomson/ David Beck took second place on the day and the Ngongotaha¯ combination of Char Beckett (sk)/ Paul Graham/Lydia Sage/Mitch Hunuhunu claimed the third prize. Sandra Burrows (sk)/Marlene Jordan/PhilBurrows/ Rusty Petterson (Taupo¯) won the drawn prize. Brian Rohloff/Colin Light were outright winners in the club 2x4x2 pairs with Urshla Croft/Steve Dickens winning second prize after a win and a draw and Janice Collier/ Kirsty Byloo taking third prize. Mark Mikkelson/Elaine won the drawn prize. Next weekend features the junior championship pairs and singles for men and women and the final of the men’s championship pairs.