New Year Honour for career that began in 1965 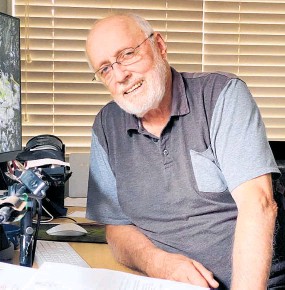 When it comes to journalism in New Zealand, Jim Tucker could be said to have written the book on it. In fact, he has written several books including two journalism textbooks over the years. Jim has been made an Officer of the New Zealand Order of Merit (ONZM) for services to journalism in the 2022 New Year Honours list. That service to journalism references a career in the field that began in 1965, and has resulted in six national awards. From his starting days as a cadet reporter at the in New Plymouth, Tucker has worked as a reporter, editor, subeditor and photographer as well as a journalism lecturer at three institutions. The honour was unexpected, says Jim, so unexpected he did what any journalist does, and did his own factchecking before he was convinced it wasn’t a joke. “The first contact was an email, and I had just written a controversial column about anti-vaxxers which had led to me getting some very strong threats as well as someone setting up a faux Jim Tucker online persona. So to then get an email from what purported to be the Government, saying oh you’re going to get gonged, well the thought was there it might be some elaborate joke somehow. So I called them up and asked if it was for real.” Having confirmed it was indeed, “for real”, Jim told his wife, son and brother, photo-journalist Rob Tucker, and started taking in that the Government was honouring a journalist. “I think that is the really important bit, that it’s for services to journalism, I hope that is something all journalists can take pride in in a way. It normally doesn’t happen to journalists, we are not trusted, we are not understood, and certainly when it comes to government, local and national, we are there to hold them to account, to question and to challenge, so to get an honour like this, from the Government, that is a big thing.” With a career spanning over five decades, he’s covered many big stories, but one in particular stands out for him. “In the early 70s. I became aware of how bad our rivers were, a couple of surfers called into the office of the where I worked, to tell us about how they could see the pollution in the ocean, the could smell it as well, and noticed if they cut themselves when surfing, it took ages to heal. That got my curiosity going, because it matched what I had been seeing at several country council meetings. Officers would raise concerns about pollution from dairy factories or farms, but they would be brushed off by the councillors. I realised some of the councillors were farmers themselves or had connections to farming, and so I started looking into it.” As a reporter in a busy newsroom, he couldn’t get the time to do any serious investigative work during work hours, so began taking his camera out in his free time, looking for the cause of the region’s polluted waterways. That work led to a series of articles exposing the pollution leading to a widespread cleanup of the rivers and causes of their pollution. The series of articles earned Jim what he calls “a gong” from the New Zealand Conservation Society as well as an award in that year’s New Zealand journalism awards. He later moved to Auckland where he worked in newsrooms as well as a couple of years working as a news editor for a magazine. From there, he went on to head up journalism schools at the Auckland University of Technology, Western Institute of Technology and Whitireia. He has also been the executive director of the New Zealand Journalists Training Organisation and served as a media commentator and media awards judge over the years. A life member of the Journalism Education Association of New Zealand he was invited to join the organising panel of the Global Intermedia Dialogue and was awarded the Race relations Commissioner Award for New Zealand Diversity Action. And over the years he has still found the time to write several books, on journalism and other subjects. One of his first books was written while he was teaching journalism in Auckland. “I realised we didn’t have a textbook, so, after we decided one was needed, I wrote it.” That was followed seven years later by published by the NZ Journalists Training Organisation after it approached him saying a book was needed with a broader scope, to cover radio/TV as well as print. Tucker wrote some of the chapters and edited the rest of the resultant book, which has gone through three editions and was the main textbook for journalism school until 2007. Jim has also written several books about various Taranaki people as well as one commemorating the 25th anniversary of Hospice Taranaki. A collection of selected columns of his was also published this year as a fundraiser for Hospice Taranaki. His next writing project is due to be published next month and is, he says, the first part of his memoirs. “At this rate it’s going to be a trilogy,” he says of “My mother kept clippings of every important story I wrote, I have a hell of a lot of material to go through as I write my memoirs.”