In 2018 a delegation of representatives on behalf of the National Iwi Chairs Forum headed to Dubai. The mission was built on the relationship groundwork initiated by Ngahiwi Tomoana with the then New Zealandbased UAE Ambassador Saleh Aluswaidi, and Dubai Exports. The mission delegates also explored the opportunities for trade with the UAE and the surrounding region who offer a long-term market opportunity, built on indigenous to indigenous connections and common values. EXPO 2020 also represented a significant (commercial and cultural) milestone to aim for a Ma¯oriled and indigenous programme to showcase to the world. Three years on, for the first time at aWorld Expo, Aotearoa has hosted a Festival of Indigenous and Tribal Ideas. On November 17-19 Aotearoa brought together indigenous and tribal people to ignite new connections, sophisticated partnerships and enduring coalitions. Expo 2020 Dubai opened on October 1, 2021, and will run until March 31, 2022. It is the global stage for business where countries all over the world come to showcase their new innovations. It’s a place where you can meet ordinary people doing extraordinary things. A super networking opportunity for the world. Te Aratini is the name of the festival that conveyed the idea of many converging pathways and was developed in partnership with the Iwi Chairs Forum through the guidance and vision of Nga¯ti Kahungunu tribal leader Tomoana. He explained: “When indigenous and tribal peoples talk trade, it’s not just about products and free-trade agreements. We’re talking more deeply about relationships, reciprocity, and responsibility to our communities. `We live by the view that culture counts in commerce, community, and conservation. So, in forging trading relationships it is critical that healthcare, environment, language and culture are all part of that broader trade and economic policy conversation. “As intended Te Aratini ignited our ancient relationships where time and circumstance has impeded our ability to keep some of those connections warm. “We nurtured and strengthened relationships,” says Tomoana. The main session topics at this conference will include “Reasserting Indigenous & Tribal Peoples’ economies through languages and values” and “Reactivating our Trade & Economic Co-operation Connections”. Nga¯ti Kahungunu had a strong presence with iwi leader Tomoana at the helm. Kahungunu speakers and performers included Kahurangi Performing Arts under the direction of Ellison Huata, MC/ Facilitator Shane Taurima, New Zealand businesswoman Mavis Mullins, WERO NZ Manuka Honey owner Patrick Mason, Dr Hinemoa Elder and Nga¯ti Kahungunu’s own Takitimu Seafoods Limited. The event was managed by Trailmedia director Traci Tuimaseve. The next hosts are the Inuit Tribe from Japan. The next Expo is set to take place in 2025. 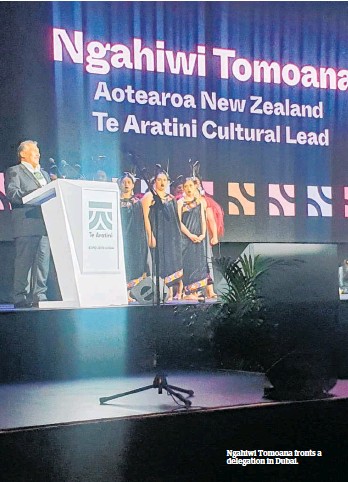