Peter Dragicevich checks out history and kai in Dargaville. 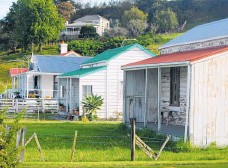 Tucked away on the west coast of Te Tai Tokerau, Dargaville isn’t exactly en route to anywhere substantial. Unless, of course, you’re embarking on the classic greatest-hits-ofNorthland holiday loop: beach hopping along the east coast to the Bay of Islands, Doubtless Bay and Cape Re¯ inga before returning via the Hokianga Harbour and Waipoua Forest. Then this sleepy riverside town is conveniently positioned on SH12 about an hour’s drive from the giant trees, Whanga¯ rei and the Auckland border. Positioned where the Kaihu¯ River empties into the broad brown Wairoa River, Dargaville is an agricultural hub with a population of around 4800 people of which well over a third are Ma¯ ori. It’s known as New Zealand’s ku¯ mara capital, and farm-gate honesty boxes provide opportunities to stock up on the iconic root vegetable in purple, orange, red or ‘Tokatoka gold’, named after a distinctive local mountain peak. The town got its start in 1872 when timber merchant Joseph Dargaville purchased 171 acres from the local iwi, Nga¯ ti Wha¯ tuaaffiliated Te Roroa. Dargaville was a burly Irishman from County Cork of Huguenot (French Protestant) extraction, with a bald head and a prodigious beard, who had made his money as a banker in Australia. He was also a Freemason and a member of the Orange Order, and would become the grandmaster of the Orange Lodge of New Zealand. In the 1870s, his main focus was on exploiting Kaipara’s mighty kauri forests. In the newly fledged town (named after himself) he set about building a large timber store, gum shed, wharves and tramways. A set of enigmatically decrepit boatbuilding sheds, lining the riverbank on the spit wedged between the Kaihu¯ and Wairoa Rivers, dates from this time. Dargaville also donated land to build the Gothic-Revival Holy Trinity Anglican Church in Hokianga Rd, which was completed in 1878. Ironically, the architect who designed it was Edward Mahoney, an Irish Catholic also from County Cork. The boatsheds and church are just two of a surprising 23 heritage-listed buildings in the town centre. These include three substantial two-storey wooden hotels — the Commercial (built in 1895), Central (1901) and Northern Wairoa (1924) — which remain some of Dargaville’s most prominent landmarks. However, the only building to have a category-one listing is the former Post Office at the corner of Normanby St and Hokianga Rd, built in 1914 in the Imperial Baroque style complete with columns and a squat clocktower. In 1919, it gained the distinction of being the first post office in NZ to receive domestic airmail, courtesy of a seaplane from Auckland landing on the river. After the forests were obliterated, a secondary industry arose in kauri gum, which was used as a varnish and in the production of linoleum. From the late 19th-century the backbreaking work of digging through the mud for the golden gum was taken up by immigrants from the Dalmatia region of present-day Croatia (then part of the AustroHungarian Empire). Today Dargaville is one of the three places (along with Kaitaia and West Auckland) most closely identified with New Zealand’s Croatian community, and the Dargaville Dalmatian Club keeps their traditions alive. Prominent Kiwi Croats to have emerged from Dargaville have included acclaimed artist Milan Mrkusich and novelist Amelia Batistich. You can learn more about all of Kaipara’s communities and industries, and view a collection of polished kauri gum at the wonderful Dargaville Museum/ Te Whare Taonga o Tunatahi. Positioned on a hill overlooking town, it incorporates a reconstructed gumdiggers’ camp and a gorgeous wooden neoclassical library building relocated from Aratapu, dating from 1874. Mounted beside a pa¯ site nearby are the masts of the ill-fated yet legendary Greenpeace flagship, the Rainbow Warrior. Back on the flat, there are some decent places to fill your belly. Blah Blah Blah, on the main Victoria St strip has been the goto cafe/bar for many years. A few doors down is Matich’s Fish Shop, and you’ll find Indian and Thai restaurants nearby. Vegetarians and vegans may like to check out the Providence wholefood store and cafe, before the bridge in Normanby Rd. Although Dargaville itself may not offer a lot to detain travellers for long, it’s an interesting refuelling stop and the gateway to fascinating places such as remote Pouto Point, 107km-long Ripiro Beach and the Kai Iwi Lakes. And the ku¯ mara really is worth the stop.