Work among those to raise money for Abbeyfield house 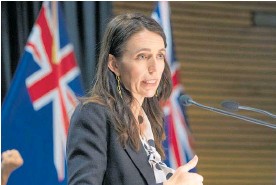 Apiece of doodle art by Prime Minister Jacinda Ardern is among artworks in an online auction fundraiser to build an Abbeyfield house in Katikati. The online art auction has been launched on Trade Me. Carole Parker, president of Abbeyfield Western Bay of Plenty says they have more than 30 donated artworks and will be releasing them in small lots over the next few months. Artists from Katikati and Omokoroa ¯ Art Groups have donated their artwork, along with the Prime Minister. “We are grateful for their support,” says Carole. Abbeyfield Western Bay of Plenty have secured a site in Wills Rd and plan to build a house to provide affordable accommodation for 14 residents aged over 65 with modest or no assets. There are already 14 Abbeyfield houses nationwide — this will be the first one to be built in Katikati and is supported by Abbeyfield NZ. A Garden Ramble on November 6-7 generated significant money for the project. “Thanks to Katikati Rotary Club and Rod and Mary-Ann Calver for allowing us to have two stalls in their lovely garden,” Carole says. She thanks those who supported them by purchasing produce and also the volunteers helping out over the weekend. Also the Katikati Patchwork Group members who made a fabulous quilt for a raffle. “Thank you for selling raffle tickets and donating money raised for Abbeyfield Western Bay of Plenty. We are truly grateful and humbled by your support.” Arty Tarts in Katikati held their own fundraiser running a raffle prior to Christmas 2021. They donated the raffle proceeds to Abbeyfield WBoP which Carole says was appreciated. With summer comes lots of produce for making jams, chutneys, pickles, sauces and relishes. The Abbeyfield WBoP committee is looking for people to lend a hand to prepare fruit and vegetables, also to remove labels on jars and clean them. “We are never sure when produce will be donated, and it needs to be prepared as soon as possible to reduce waste. “We would like to build a team of volunteers to call on when help is needed. “The busy season starts now through to April and we’d be grateful to have help.”