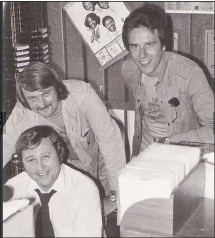 On the corner of Heretaunga St East and Warren St South — where Hawke’s Bay Today offices are — was a radio station with the call sign 2ZL. It was a private station run by Lockyers Electrical (who also ran 2ZH in Napier). 2ZL had begun in 1930 and closed in November 1937. The people of Hastings were bitterly disappointed to lose this radio station, and a petition signed by 500 people to the government failed to save it. They would have to make do with the Napier radio station 2ZH, which became 2YH in November 1938. Hastings would not have its own physical radio presence until the New Zealand Broadcasting Corporation (NZBC) built premises around the late 1960s one block away from where 2ZL once was — on the corner of Eastbourne St East and Warren St South (Hansen and Bate now occupy this building). In order to try to keep the Hastings people happy, some broadcasts were made by 2ZC Twin City Radio on 1280AM in this building. Although it was a Napier-based station and branded Twin-City Radio, and Hawke’s Bay, being what it is — Hastings still wanted their own radio station. They got their wish in 1977 when Apple Radio 2ZK began broadcasting on 730AM. Broadcasting on the first day was Neil Dunn — who now works as Skoda brand manager at Euro City in Napier. Dunn’s career in radio had begun in 1975 at 2ZW in Wanganui, and he was “hearing some noise about setting up a radio station in Hastings”. It was more than “noise” and Dunn was asked to become part of a fourperson announcer team in Hastings. They would use the studios used for broadcasts by 2ZC announcers from Napier. With a radio station now in Hastings, 2ZC dropped Twin City Radio and rebranded itself as Bay City Radio. There were two good reasons why the NZBC wanted to establish in Hastings. They wanted to head off any private radio challenging what had become a top performing radio station in 2ZC Napier. Also, it was a way to bring the Concert Programme to Hawke’s Bay. Apple Radio would operate on air from 6am to 5pm, at which time the Concert Programme would go to air on the same frequency. Speaking about his experiences in 2021, Dunn recalls the opening day’s Apple Radio broadcast did not go smoothly. For a start, the hired breakfast announcer did not show up! Programme director Cliff Valentine had to step in while the next announcer in line — Dave Lenihan — was summoned. Dave Richards took over from him, with Dunn coming on to do the 2pm to 5pm shift. All seemed to be going well — that was until Dunn played a Carpenters song called Goodbye to Love, which featured a guitar break solo by Tony Peluso. Listening intently to Apple Radio’s first day broadcast was the Napier-based regional Hawke’s Bay NZBC station manager. He decided, as Dunn recalls, this did not fit the “Sweet sounds of Apple Radio”. The manager dispatched someone promptly from Napier to Apple Radio to take Dunn off air, who made a hasty — if not puzzled retreat, to the Anvil Court Motel, where he was staying. The manager made an appearance to the Anvil Court Motel later that day, and indicated perhaps he’d been a bit hasty, and Dunn was allowed back on air the next day. The team at Apple Radio, in addition to the announcers, and programme director included two sales reps, two copywriters, a journalist, a technician and a tea lady, Olive Sheffield, affectionately known as “Sheffie”. She would take morning tea orders and pick them up from the Lilac Bakery nearby. Those at Apple Radio were immensely proud of what they were doing, and the Hastings people loved it. Even though, Dunn recalls, it was a bit strange when he signed off at 5pm each night to his relaxed “see ya tomorrow” to be followed by the Concert Programme announcer’s correct BBC pronunciation, who was likely dressed in a suit and tie. When Bay City Radio wanted to promote their own station on Apple Radio — the Hastings station refused. They were building up an audience and were not going to send them away to another frequency. This didn’t go down well with Napier. In 1978, the frequency changed to 765AM. The Concert Programme shared the Apple Radio frequency until 1983, when it went onto 91.1FM. Apple Radio at that point became “The All New 77ZK”. In 1988 the station changed to “Greatest Hits 77ZK”. When the station went onto the FM frequency in 1989, the AM frequency was dropped, and the station became Greatest Hits FM96. It was also broadcast in Wairoa on 99.7FM. Another change was made becoming “Classic Rock 96FM” in 1992, before being replaced by the networked Radio Hauraki in 1998. Today most of New Zealand’s commercial radio stations are owned by MediaWorks and NZME. Dunn left for Tauranga to work at Radio BOP, then had a stint in Auckland at ZM. He would however come back to Hawke’s Bay as the senior announcer at Bay City Radio. He would later help set up a station as an experiment in Hawke’s Bay called “Jammin Oldies”, which would become “Coast”. An opportunity with Coast was created for him in Auckland in 2003, but being settled in Hawke’s Bay, an advertiser, Russell Greer, sensing his reluctance to leave, offered him a position with his company. Radio is still in Dunn’s blood and it would be fair to say he misses it. He isn’t completely off air however, and you might be able to catch his smooth sounding dulcet tones on a Euro City radio commercial.