FILIPINO-AUSTRALIAN FOOD and travel writer Yasmin Newman's new cookbook, Under Coconut Skies, is one of feasts filled with vibrant and kaleidoscopic Filipino flavours. Yasmin spent months in the Philippines putting these recipes together along with ageold traditions, rich folklore and enchanting personal stories of the country. From sizzling wild mushroom sisig, golden turmeric and cassia bark rice from the Muslim south and pork belly adobo to glistening candied kalamansi cake, Yasmin invites readers into the homes of friends and locals to share traditional dishes and modern interpretations of the classics. TURMERIC & CASSIA BARK RICE KIONING Not a meal goes by that's not served with rice, whether freshly steamed (kanin) or glistening with garlic and oil. In the south, you'll often see it in yellow mounds, tinted and perfumed with turmeric — my eyes always gravitate to this beautiful sight. It's sometimes called Java rice, made famous by The Aristocrat Restaurant in Manila and owing to its similarity to Indonesian nasi kuning. Like much of the food throughout Mindanao and the Malay peninsula, the dishes are indeed related; kioning is the name given by the Maranao tribe, who shape their brilliant yellow rice into coneshaped pyramids using banana leaves. It's variously enriched with lemongrass, cassia leaf or bay leaf, but this alluring version is scented with cassia bark and made creamy from evaporated milk. Make sure to use fresh turmeric — a far cry from ground when it comes to flavour. Once you try it, you won't want to make rice any other way again. Ingredients 2 Tbsp vegetable oil 1 small red onion, thinly sliced sea salt and freshly cracked black pepper 2 garlic cloves, finely chopped 3cm piece of ginger, peeled, finely grated 4cm piece of turmeric, peeled, finely grated 1 cassia bark stick or 1⁄2 tsp ground cinnamon 500g jasmine rice 725ml vegetable or chicken stock 125ml evaporated milk, plus extra to serve micro coriander leaves, to serve (optional) METHOD Heat the oil in a saucepan over medium heat. Add the onion, season with salt and pepper and cook, stirring, for 4 minutes or until soft. Add the garlic, ginger, turmeric and cassia bark or cinnamon and cook, stirring, for 1 minute or until fragrant and the oil is yellow. Add the rice and stir until well coated in the yellow oil. Add the stock and evaporated milk and bring to the boil, then reduce the heat to low and cook, covered, for 12 minutes or until the liquid is absorbed. Remove the pan from the heat and stand, covered, for 5 minutes or until the rice is tender. Pile the rice onto a serving platter or shape into individual mounds using a small bowl. Season with salt and pepper, drizzle over the extra evaporated milk and scatter with the micro coriander (if using). — Serves 6 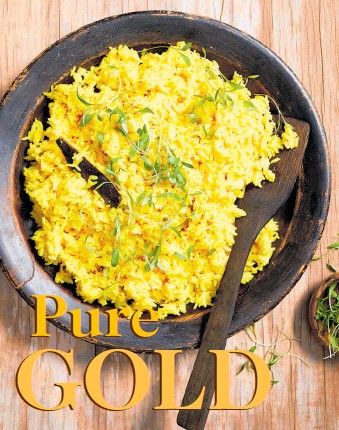